In July 1969, an estimated 650 million people watched the historic moon landing live on TV. Many young viewers in the U.S. would mark that moment as an inflection point in their lives. Federal investments in the space program not only paid off with countless technological advances but also served to inspire many to pursue careers in STEM.

As Congress considers significant investments in clean energy research, development, and deployment, lessons from the space race echo decades later, as portions of proposed spending could soon be channeled to scholarships across the country in STEM degrees. The evidence is clear, investments in cleantech RD&D pay off in both the short and long-term in jobs now and cost declines going forward for businesses and families far into the future.

The educational spillover effects of federal support for young people in scientific innovation was on full display this month, as 13 teams of undergraduate students competed in the U.S. Department of Energy (DOE) Collegiate Wind Competition (CWC). 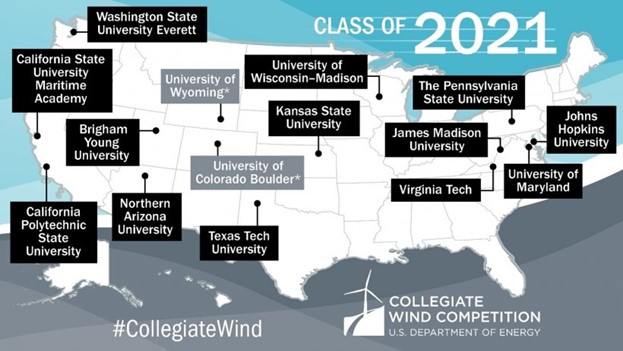 CWC challenges interdisciplinary teams of undergraduate students from a variety of programs to offer a unique solution to a complex wind energy project, preparing them for the wind industry workforce. Held as a virtual event June 2–11, 2021 CWC consisted of three components. Students presented their work on each component virtually to panels of judges.

Through the Turbine Prototype Contest & Turbine Testing Contest, teams designed, built, and present a unique, wind-driven power system based on market research and tested the wind turbine in an on-site wind tunnel. Through the Project Development Contest, teams designed a hypothetical utility wind farm that maximizes energy production and balances environmental and community impacts. And finally, through the Connection Creation Contest, teams partnered with wind industry professionals, raised awareness of wind energy in their local communities, and worked with local media to promote their team’s accomplishments.

Clean Energy Business Network (CEBN) President Lynn Abramson was one of the judges for the Connection Creations Contest, which was a new element of the competition this year. One of her fellow judges, Andy Lueth of KidWind Project, Inc., remarked in the final deliberations, “This has restored my faith in the American education system!”

Students showcased their talents in unique ways. The first-place winner of the Connection Creation Contest portion of the competition was Virginia Tech University, which distributed “MacGyver” wind turbine kits to high school students and produced an online event to build and test turbines together.

All the teams presented an impressive overview of their work and demonstrated the innovative and entrepreneurial spirit that has undergirded American progress since the Space Race.

The stakes couldn’t be higher. We need as many bright young people as possible to jump into the clean energy workforce, which is hundreds of thousands strong and growing, to help push clean energy forward. While we need to deploy existing clean energy at scale and speed, we also need commercialize new technologies not yet ready for broad deployment.

Recently, the Administration released the report of its 100-day review of supply chain vulnerabilities; many of these critical supply chain bottle necks overlap with the clean energy economy, including critical minerals, batteries, and semi-conductors. It’s clear that innovating the next generation of clean energy technologies in the U.S. and building them with American workers is critical to boosting national security of these supply chains.

As the small business voice for the clean energy economy, CEBN was encouraged to see the report’s recognition of the importance that small and medium-size businesses play across these critical supply chains. To boost domestic innovation, manufacturing, and competitiveness, CEBN has called on Congress to support a multi-billion-dollar boost to vital research, demonstration, and deployment programs across all Science and Energy program areas at DOE.

This includes investments across the National Labs and through critical programs like the Small Business Innovation Research, Small Business Technology Transfer, and American-Made Challenges programs. In addition, we are working to make such programs even more accessible and impactful for small businesses, particularly in under-served communities.

These investments would not help to create opportunities for the young talent on display during CWC, but also help to encourage more students to pursue careers in clean energy and STEM more broadly.